IF YOU HAVEN’T HEARD OF ANNABETH BARNES…YOU WILL!
Annabeth has become one of the hottest up and coming girls in motorsports. It is hard to imagine a young female driver with more championships (17) then her age. Annabeth has been wheeling since age 7. She started out in go-karts and in her short career, Annabeth has done nothing but stay at the front of the pack and caught the attention of many. She has kept her name at the top of the charts and a target on her back making her the fierce competitor that defines Annabeth.

Annabeth has always been around racing, her father raced stock cars for many years and at an early age Annabeth showed a interest in the sport. She has been relentless in her pursuit to race and become one of the top female in the motorsports.

In 2011, Annabeth will be running 23 events in the Limited Late Model series. She will also be running for Rookie of the Year and possibly the track championship.

In 2010 at the ripe age 14 she will continue her move up through the racing ranks by stepping in a Limited Late Model car at Hickory Speedway. Running a limited schedule in the car for 2010, she will also be racing in the Young Lions division at Lowes Motor Speedway in the summer shootout. Getting plenty of seat time in different types of horsepower. As she continues to raise the bar at the wheel, she still has many Championships to be won and goals to accomplish.

In 2008 Annabeth was chosen to be a part of the Drive for Diversity program making her the youngest participant in the program. She made the most of it by winning 2 WKA National titles, 2 WKA Grand National titles, 4 WKA Tennessee State titles all on Dirt. And picking up 3 WKA North Carolina State titles on Asphalt. In that year Annabeth also received the Young Racer Award from NASCAR for her outstanding achievements on the race track. She has been featured in Sports Illustrated, and numerous karting magazines.

2007 She was chosen to part of the movie Racing Dreams which was an honor in its self. That followed her at all the WKA Asphalt Nationals and around the country. Check the link out!

2006 won The biggest junior racing event, The Jr. Big Dog sat on the pole and lead every lap. Also went on to pick up 4 more championship that yr.

Annabeth won 18 out of 22 races in her rookie season (2004) and has not looked back. Going from Tennessee, Virginia, Florida, New York, Kansas, Georgia, North Carolina, South Carolina . She has won hundreds of races on dirt and asphalt. Taking Local, WKA State, and WKA National titles.

RT @HannahNewhouse Do we consider the dating life of male competitors as necessary “pre-race notes”? Come on y’all... And before any confusion- these aren’t my notes. pic.twitter.com/YsumIHOIkl

No. It wouldn’t. If they were together, yes. Not now. Why? No one cares and honestly it’s mind blowing that this is a thing. twitter.com/miguelluna1994…

RT @PRWchassis They say all is fair in love and racing, I guess it still holds true. Our guest this week on the Fast 15 is the bubbly @Annabethh . As always, the full episode will drop tomorrow evening. You won't want to miss it. #PRWChassis #Fast15 #AnnabethBarnesRacing #Fair #LoveAndRacing pic.twitter.com/dIe5bmzrY5 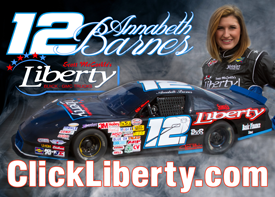